You may have heard about the Boston ‘Straight Pride‘ proposal. More on that later.

Why can’t the straights have a Pride?

is not just literally having some pride (anyone can do that) but more for protesting the bigotry, discrimination and violence meted out to the LGBTQI community. Pride is a counter to the shame that is inflicted upon the “non-standard” sexualities and genders.

A demand to be allowed to live freely and safely. ‘Pride’ only in the sense that we should be free to be without ridicule or threat; to be open and true to oneself without restriction because simply being harms no one.

Straight people do not need this; it’s the cultural default and you are safe as can be.

Pride [the emotional state/concept] is a weird thing at the best of times. It’s maybe most relevant to achievements. And actually, in this world, being outside the acceptable norms and surviving is an achievement. Because of bigoted assholes who enact violence because they’re scared of difference and therefore hate it.

There is zero achievement in being straight in this world. It is expected of you. It is shown to you from the moment you are born as the standard human way of life. You are not shamed for it. Challenging that idea is an achievement (regardless of your own orientation). Living outside it to pursue your happiness is achievement.

“Straight Pride” is is a ruse orchestrated by the far right designed to attract people with resentment, who feel that others having recognition and acceptance somehow makes them less acceptable, when they already have all the acceptance in the fucking world. Don’t be nazis, straights.

Teaching kids that a whole bunch of different people exist and that’s OK is not ‘indoctrination’. Knowledge of something won’t make you into that thing. Did you want every job you ever heard of? No. Understanding builds tolerance. People shouldn’t have to fight to just exist.

But every day people are told they’re broken and wrong, with words, with exclusion, with invisibility and violence and legal restriction, with discrimination and barriers to opportunity. With murder. No one suffers this because they are straight. Some do for other reasons (hi, intersectionality; straight people who live under some other part of the minority or oppressed umbrella aren’t going to automatically avoid all life’s struggles by virtue of their accepted sexuality. But none of those struggles will arise from their straightness).

The imagined trials of straightness

So please. Next time you see someone whine about why they can’t have a Pride for their common or garden heterosexuality, do ask them how, exactly, they have suffered for it in their lives. 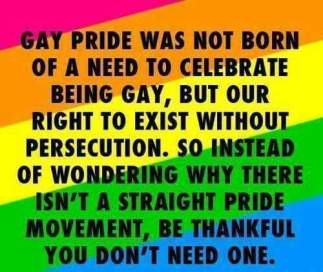 “Pride was not born of a need to celebrate being gay [lesbian, bi, trans, intersex, queer…], but our right to exist without persecution. So instead of wondering why there isn’t a straight pride movement, be thankful you don’t need one.” – source unknown

What taunts did they receive at school (beyond the usual “Haha what you fancy WHO NOW?” because kids are cruel about anything) and what persisted into adulthood? What’s been shouted at them on the street by strangers, how many slurs that focus on straightness even exist?

How scared have they felt to hold the hand of their partner in public? To hug them, to kiss them? Have they ever felt any compulsion at all to be circumspect in an everyday situation when with their significant other, because any random bystander could take exception to your display of affection for this person, and put your safety at risk?

How many times are they met with confusion when they introduce a spouse? Do they worry about how to refer to them; does ‘wife’ or ‘husband’ carry any risk of attack (verbal or otherwise) from anyone they’ve ever met? Are they living in one of those places where straight people aren’t even allowed to marry? After all, it’s been traditional in many cultures that only non-straight marriage is permitted (just in case you don’t see it, the sarcasm is creeping in now).

Have they wondered about how to reveal their sexuality to colleagues, or family, ever? How many of their straight peers have been made homeless by the people who professed to love them after discovering their straightness? How many have ended up in hospital after an attack, or been lost to a hate-fuelled murder?

Have they ever wondered when they might see a straight couple in their favourite TV show or movie, or do they struggle to find role models in popular culture generally for their straight kids? Do they worry about how they might have children and whether they’ll be bullied at school because their parents are straight?

Are they haunted by the history of pseudoscientific efforts to categorise the way they feel about other human beings as a mental illness and did their relatives or family ever send them to an abusive camp to try to make them less straight or get rid of it altogether?

How many countries have governments turning a blind eye to gangs whose explicit purpose is to harass, attack, murder or drive out straight people? How many have laws against straightness? How many will see you arrested for displaying your heterosexual affection in public? How many will execute you, and how many other countries will willingly send you back to face that even if you escape?

How many religious people have discussed their personal lives openly in front of them and said “Oh no we don’t hate you! Just what you choose to do, that’s sinful and you’ll burn in hell for it. But we love you.”

Do people always assume they’re not straight when they hang out with friends of the same gender and show some horror or shock when corrected? Do people question your right to claim your gender as your own? Are you told you don’t look straight enough, or too straight?

And so the imagined victims

There is so much more to the small and large adversity that LGBTQI+ folks experience in life but it’s always worth stopping to think about how much “straightness” has mattered in your life, in terms of negative experience following directly from it. Honestly, if you find one, I’ll hear it. If it’s not in fact misogyny or racism or ableism or similar, well done. You’ll have found a problem with being straight.

What people are doing is railing against diversity, inclusion and equality of opportunity, because that’s what insecure, toxic bigotry demands of its proponents. The “too PC!” brigade, the “shoving it down our throats!” ironic phrase fans, the “I just don’t want to see it” oblivious.

They’re worried that progress is happening and will take away their default-given powers of preferential treatment based on nothing but happening to fall into the most accepted categories of societies built on layers of discrimination. That worry does not deserve to be entertained, but dismissed. They believe they’re being shamed for being the default (or not “special”?) – when the actual problem is that any cultural default exists, that the range of acceptance is so narrow, not simply that they’re within it. Instead of trying to understand, they revert again to suppression and oppression – plus ça change.

There is no need for straight pride, because straight has never been presented or treated as less than. ‘Straights’ were not rounded up during the holocaust like LGBT people (many gay men) were. You have your acceptance. Expand it out for everyone else. It won’t take anything away from you.

Pride was a riot.

Take none of this as a claim that there are no problems with Pride itself. It’s often a very white affair – issues of racism, sexual violence and ableism/inaccessibility affect people every year and the LGBT+ community has to keep working on that like everyone else, too.

Edit: this was originally at the top but some people who aren’t as anti-nazi as they should be (which is completely, FYI) decided to stop reading as soon as they saw this. So now it’s at the end.
This isn’t just some straight people feeling left out and demanding faux equality. It’s actual neo-nazi assholery; of course (some) people are rightly put-off by outright nazi agendas (sadly not everyone, what a time to be alive) so this is a neat way for them to pull in some generally uncomfortable people to their cause. Don’t fall for it.

There were a lot of tweets about the “Straight Pride” parade that’s going to be held in Boston in August.

It’s just a rebrand of Resist Marxism, a violent far-right group based in Boston, MA.

Let’s meet the organizer, Mark Sahady, and see his ties to violence and hate. pic.twitter.com/NZtfB7N9P8

→ See full thread. You can also read more about what they’ve been up to the last 2 years.

I tweeted a tirade on the idea of the event too so this post was meant as a more shareable/readable form.

20 thoughts on ““Straight Pride” isn’t a thing, nor should it be”