Another update to the Science Wooseum story. 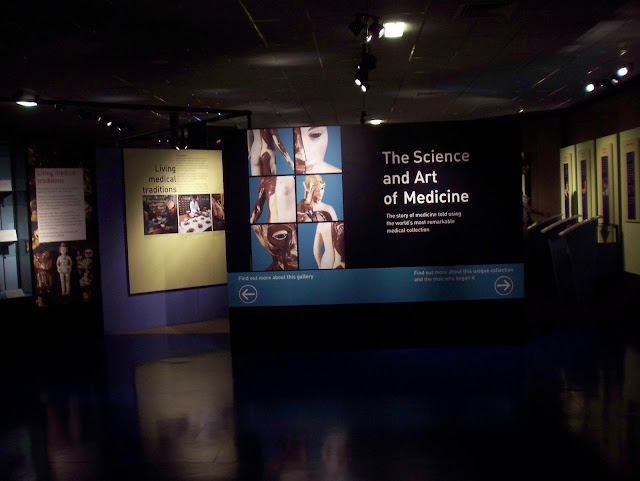 I took some time to document more of the exhibit, which is indeed tucked away on the top floor, sandwiched between two very good (and bigger) displays relating to the development of modern medicine. Some really amazing pieces in there. I’ve made a web album of the photos.

The Living Medical Traditions section is definitely worrying. It has a completely different feel.

In contrast to the display just around the corner, Living Medical Traditions are presented as credible practices simply because they are old and lots of people still subscribe to them.

There’s no educational value in this, and some of it is just wrong. Simon Singh and Edzard Ernst did a better job of researching the origins of alternative medicines (e.g. the possibility that acupuncture actually originated in central Europe) – why was Ernst not consulted*?

In the Before Modern Medicine exhibit, the practices of ‘Western’ physicians that are now discredited (such as blood-letting) are openly mocked, complete with caricatures and categorical statements that people were frauds making money out of the vulnerable. We still see plenty of that going on today.

Renaissance practices that don’t fit in with the scientific knowledge we’ve gained since (such as alchemy, astrology – which plenty of people still believe in – blood-letting and so on) are presented as ‘magic‘ and folklore. There are also some beautiful artefacts chronicling some of the medical advances borne out of closer studies of human anatomy and disease.

The tone is very detached; people used to do these things. Wasn’t that silly! Look how absurd and how far we’ve come. But then when you turn a corner, it’s completely different – everything is addressed to you, telling you what you could try and what the practitioners of these traditions could use based on your needs. It all reads like one big advert.

The advertising is far more blatant in some instances though. The whole of the ‘personal stories’ interactive panel, for example (apologies for the snide comments and shrieks of horror at the cupping – not for the faint-hearted!):

To look at a couple of the main offenders (ignoring for now the Geri DVD that had us laughing):

No discussion of the conflict between hospitals and alternative practitioners, how politics, corruption and various other factors can come into these ‘choices’, the problems of herbal medicine; even if it does work, do we know why? Is it safe? Drugs that have been derived from plants and are widely-used e.g. aspirin and those that are deadly – no mention.

I can’t see this as anything other than a promotion. A commentary on how some traditions are clawing their way foil-clad into the ‘modern age’? I don’t buy it.

David Colquhoun already mentioned one of the most obvious free advertising elements; Parkbury House Surgery in St Albans probably gets a fair bit of custom out of this.

It seems Professor Shi Zaixiang wrote or at least heavily contributed to his own exhibit.

It explains that he ‘treated’ people who seemed to have Ménière’s disease, which can be serious in some cases and there is not currently a cure – though this is not mentioned on the display.

There are other concerning claims dotted around the board.

It seems that the Living Medical Traditions  gallery goes against some of the Wellcome Trust’s own proposals for how an exhibit should be put together:

1. Exhibitions should be research-led, not a form of dissemination

Research into alt med effectiveness – both the negative and positive results – is not discussed here. I overheard one girl at the acupuncture ‘interactive display’ saying “yeah this actually works doesn’t it, because these bits are sort of connected…” and later “You could probably do it at home if you had needles thin enough, right?!” – worrying.

2. A scientist should always be involved in the exhibition, a technologist if it is about technology

It doesn’t seem that any scientists were consulted here. *Professor Ernst would have been the obvious choice.

Focus on the processes of science: science in the making; the triumph of discovery; the frustration and blind alleys explored along the way. Also, look at the social and cultural processes of scientific ideas becoming accepted and embedded.

For me, the exhibit doesn’t do that. It shows ideas people have just because… well, they’ve had them for a long time. It doesn’t tie in at all with the generation of evidence-based medicine or why people are questioning the ethical acceptability of these practices.

That brings me neatly to the comments from John Beddington, the government’s chief scientific adviser. Obviously it’s probably not that sensible to compare pseudoscience to racism or sexism – so it’s better to read his comments in New Scientist for a more considered piece.

It is time the scientific community became proactive in challenging misuse of scientific evidence. We must make evidence, and associated uncertainties, accessible and explicable… We must also be confident in challenging the misrepresentation or exaggeration of evidence and the conclusions it leads to. Where significant consensus exists, it must be made obvious.

He is essentially issuing a rallying cry to challenge pseudoscience, from misplaced scepticism to deliberately misleading and fraudulent claims.

I believe the Science Museum’s tactic here is contrary to this; of course, my view is distorted by the circles I move in and we’re all more concerned about it than Joe Public, but I’d almost see that as another symptom of widespread ignorance of what evidence-based medicine and the scientific method actually are.

Once again, I have no issue with examining alternative medicine in a museum setting, I simply have a problem with the way this is presented; more interesting avenues have been shirked in favour of what mainly comes across as promotion largely due to the language employed.

I’m not sure what the next step is, if anything – hopefully the post and the photos give a better idea of our particular objections to this exhibit.

Zeno’s blog on the MHRA and homeopathy. Relevant, seeing as the Museum can’t even get it right when it comes to homeopathy. It’s not minute quantities, it’s nothing at all. Even the New Zealand Institute of Chemistry are joining in now.